Digital disruption can help businesses, or even entire industries, or destroy them. Digital innovation, however, does not have to result in disruption per se.

“Deliver to the world what you would buy if you were on the other end.” Charlie Munger, Vice Chairman of Berkshire Hathaway

In 1997 Clayton Christenson coined the term “digital disruption” and framed a discussion that has continued for some 20 years on how and why new market entrepreneurial ventures succeed. He described the Innovator’s Dilemma: “Well-managed companies often fail because the very management practices that have allowed them to become industry leaders also make it extremely difficult for them to develop the disruptive technologies that ultimately steal away their markets.”[i]

The theory can be compelling. New market entrants provide a product or service competing for only a marginal portion of a larger company’s offering. At first unnoticed or dismissed as irrelevant by the major player, enthusiasm in the marketplace for the lower price, new features, etc. propels these newcomers to success and into providing a broader offering. Eventually it erodes the giant’s position and takes them down. For digitally focused companies, the threat is that this disruption can happen fast given that rates of technical innovation have outstripped all other kinds of industry change over the past three decades.

With some 20 years of evolution in software behind us, the terms disruptive technology and disruptive innovation have been used and overused, inspiring debate as to what is disruptive and what is not. Should highly successful and innovative companies like Uber be termed “disruptive”[ii]? Indeed, is disruption in and of itself a helpful notion or should we look for more complexity in circumstances before we rush to implement a panacea to protect from/ adapt to the new disruptor? Of course, few digital innovators want to be left out of the claim to disrupt. Most telling, virtually every major consulting firm has made disruption a focus area of their practice (examples include: http://www.mckinsey.com/global-themes/digital-disruption; https://www.accenture.com/ca-en/digital-disruption-index; http://digitaldisrupt.bcgperspectives.com/).

Digital disruption can help businesses, or even entire industries, or destroy them. Digital innovation, however, does not have to result in disruption per se.

It is 2016. The lessons of digital disruption that have toppled brand giants abound and require no further daytime graveyard walk that makes them less frightening. They are not just anecdotes of recent history. The threat of being digitally replaced is very real. Big company executives understand this and try to adapt without cannibalising their business. On the other end of the spectrum, entrepreneurs know the opportunity disruption offers and nonetheless how difficult but not impossible it is to displace larger incumbents. Hence, the notion that big players are too established to take note of upstart players is not valid anymore. Although not every large business manages new disruption well, that does not mean they are “surprised” by its ascension.

Just because something is digital and innovative, does not mean it is disruptive

Many if not most digital start-ups have disruptive aspirations. However, by the original definition, they are not disruptive until they create a new market or disrupt an existing market. Until this happens, these are generally companies filling a void on the edge of a core need being serviced by a more major player. Start-ups go through stages of growth accelerated by rounds of investment. Disruption is an aspirational end game, most often not an out of the gate phenomena. 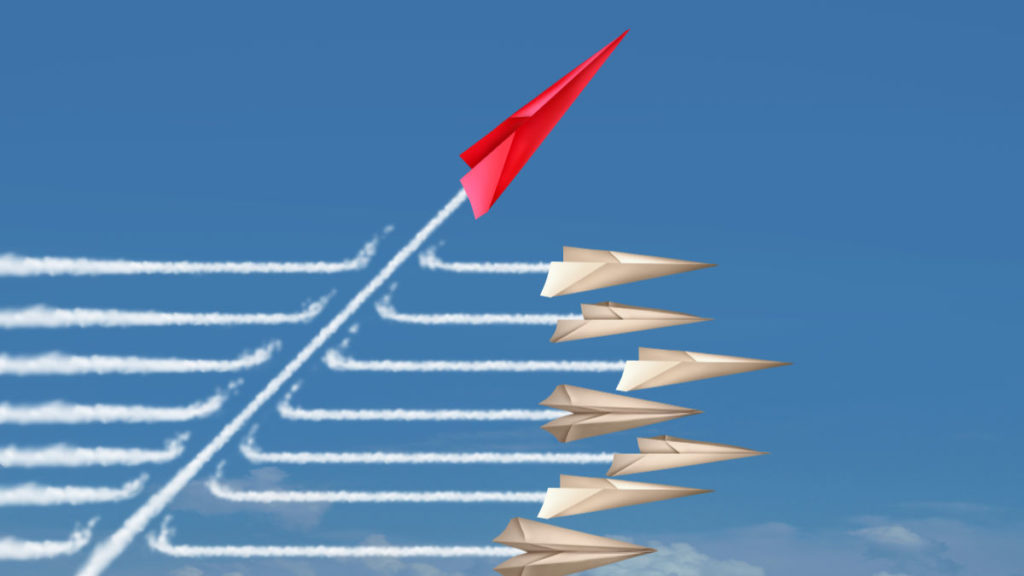 Although it is less used, a different and more helpful notion than disruption for start-up entrepreneurs and large enterprise executives to consider together is “servitization”[iii]. It is the transformational journey that (mostly) product based companies take in developing capabilities in services and solutions to supplement their traditional product offerings. Every enterprise sales executive knows that success lies in selling solutions, not products. Large businesses that ignore the necessity in shifting their offer to include a digital service/solution mix may well find other new entrants owning their customer, either upstream or downstream of the original product. Uber and Airbnb are happy to own the customer and be at the center of transactions while never having to make capital investments in the depreciating assets of vehicles or buildings. Some product companies are under threat of almost entirely disappearing and being replaced by digital players. Newspapers and much of the music industry come immediately to mind.

For software companies, the welcome news is that opportunities for disruption as well as servitization are numerous. The challenge, of course, is that the field is very crowded.

For software companies, the welcome news is that opportunities for disruption as well as servitization are numerous. The challenge, of course, is that the field is very crowded. Many new B2B software companies are solutions attempting to fill voids left by significant Platform players who in turn are serving the needs of larger corporate product driven companies. These new B2B offers fill very specific needs left unaddressed by the bigger players and need to “play nice” by plugging in with APIs to the larger solutions. Their goal is to make the major players succeed and expand their customer base, not to displace them.

Disruption itself does not have to be the aim, although displacement of other larger players may well result. The digital innovator’s obsession should be to serve their customers better, just as it is for any new company. That is where every good start-up idea finds success. As Charlie Munger, Vice Chairman of Berkshire Hathaway stated so eloquently: “Deliver to the world what you would buy if you were on the other end.”

Success is often at the Edge, not the Center

Since it is rare to discuss software investment without reference to “ecosystems,” consider what the field of biology instructs here. There are four simple systems at play between two organisms which share a common space. The one we read and hear about in software most often is the biological system of Parasitism which occurs where one entity benefits and the other is harmed. The digital disruption software play is for aggressive new offers to parasitically attack the larger incumbent offering.

Amensalism is the other dynamic system where one organism suffers harm with the other left unaffected. Nature generally favors the larger organism here. In software, new great ideas are swallowed up by larger players. The smaller software does all the hard work figuring out user needs and the bigger player simply waits and watches and eventually builds it themselves. There are vast numbers of great software products that never survive but have a cloned cousin sitting as a feature set in a larger player. By contrast, when a whole market is undergoing large changes, the smaller, faster organisms simply keep pace with the change while leaving the larger ones behind.

It is the other two systems that hold great promise but are less well understood. Commensalism is a class of relationships between two organisms where one organism benefits from the other without affecting it. Finally, Mutualism is one in which both organisms benefit from each other. Consider that great success often lies in these two options, with smaller new software co-existing with a larger software play and either doing it no harm or benefiting it by filling in the edges versus replacing the center. Salesforce.com, for example, has spawned a small industry of software plays that fill niche needs of users for particular sectors and particular use cases.

“Edge” offerings that are designed to bolt into larger software offerings are now among those most highly valued by companies and investors alike in the CRM space.[iv] These new offers work with either commensalism or mutualism to the more extensive offering. Whether it is to a larger software, or to a much broader product play in a “servitized” system, this is where much of new success lies for B2B software.

Do you want that disruptor inside your tent or out?

Big company executives have long understood the limitations of their core business expertise and when to bring in experts for support. Recognising their limited capacity to develop unique and specialised digital capabilities, large enterprises take small, calculated risks with new start-ups in many functions of their business. Tech start-ups are being brought in to become part of the ecosystem of more major companies.

Digital innovation is not just about marketing to Millennials, as we so often read about. Most profoundly perhaps, it starts with adopting new mental frameworks for production and delivery of goods and services.

Digital innovation is not just about marketing to Millennials, as we so often read about. Most profoundly perhaps, it starts with adopting new mental frameworks for production and delivery of goods and services. For example, large retailers are using agile, software like development approaches to test their offerings such as Target’s“LA25 innovation lab” where 50 new digitally enhanced retail models are being trialed at 25 of its Los Angeles stores.[vi] Further, Fortune 500 retailers including Walmart have formed software tech Accelerators in which software Start-ups co-create the next generation digitally enhanced retail shopping experiences.[vii] Many large brands are now coopting versus competing with new software innovators, as the CEO of MasterCard explains: “…we spend a great deal of time getting to know leading edge technologies, incubating them, and incorporating them in our core business to the extent that our legacy business will become our future business.”[viii]

The playbook and talk track for success has changed. More important than trying to attempt and prove disruptive capabilities, successful software companies follow the play book of all great companies. They stand the test of time with core customers, know how they add value and know who to team up with versus who to compete against. It is difficult getting this line past a Marketer’s desk: “We are a non-disruptive, innovative digital technology focused on the edge of other larger product offerings that we want to help grow.” It is nonetheless the reality for many technology start-ups today. It is particularly the case for the successful ones. Those who chase the dream of being a disruptor for the sake of being called a disruptor may face disappointment. Success comes to those who innovate in order to serve a need in the market and their customers exceptionally well.

[viii] Journal of Management Inquiry, Digital Disruption and the Future of Leadership: An interview with Rick Haythornthwaite, Chairman of Centrica and MasterCard (October 2016)