Sales, Emotions and the C-Suite

Selling and consulting to the C-Suite can be for many, an intimidating task. Executives are by definition the folks who have “made it” and it can be humbling to think we have kernels of knowledge or wisdom to offer up to these gods and goddesses of the empires they rule. As a consultant and provider of products and services to the C-Suite for many years, as well as a former executive-cum-entrepreneur myself, I offer that “level” matters less than we imagine it does. The following truism will help you hone your engagement skills and serve as a reminder that executives are first and foremost human in their nature and actions.

Emotion matters more than you have been taught to believe. We engage executives with facts, courses of actions and reassurances. That assumes people tend to think à then act à and occasionally feel. I believe that humans are far more capable of feeling à acting à thinking. These capabilities are honed, not blunted, in the C-suite despite a lifetime (hopefully) trying to temper and reverse these tendencies.

Think, Act and Feel or Feel, Act and Think?

The 150-year history of the scientific field of psychology is informative here. While tomes have been written on the subject matter at hand, it is instructive to do a bit of historical contextualizing versus plumbing the depths of Psychology’s knowledge base. To a degree not observed in other disciplines, Psychological Science was borne of a rather self-conscious act to separate itself from the field of Philosophy. The first 75 years of its existence was an attempt to build a theory of everything that revolved solely around behaviour and its scientific investigation.

In the late 1960s, after almost a century of observation, classification and experimentation on behaviors, Scientific Psychology allowed that thoughts, not just behaviors, have a role to play in human design. Cognitive Psychology was borne, offering up new all-embracing theories of everything human, according to how we think.

Emotion remained on the fringes. Although an understanding of our emotional state has laced itself into much of the serious inquiry in Psychology, it is a not a field onto itself and no attempt at an all embracing theory based on our emotional apparatus has been ventured. We are thinking, feeling and action prone beings but only two of these have received sufficient theoretical and scientific inquiry.

Certainly, Developmental Psychology informs us of the evolutionary necessity that we begin our human experience of others through emotional states that are wired directly into action (catalogue with any new parent the reasons their baby cries). Cognitive states trail quickly after as we begin classifying and ordering the world so that we can master it on our own and gain our independence. My thesis is simple: our infant, base psychological wiring is never abandoned as we journey through our ages. It is not so much that we are bound to a certain order of feeling, then acting and later thinking nor that we do not admirably follow what our good parents taught us: manage our emotions, think things well through and then act. Every well raised adolescent must roll their eyes at least a 100 times until the point is taken.

Do not be beguiled into believing the order of operations our parents teach us suggests somehow that emotions are ancillary to decision making. The occasional negative experience of “after thoughts” following our actions reveals that our emotional states are more involved in decision making than we comfortably admit. However, giving emotions fair ground, it is possible to see how they equally play a critical role in success. Great business leaders’ success hinges on being emotionally attuned to a particular market, to their customers, and to an ability to communicate this connection to others within their span of influence with passion and conviction.

The ability to harness base emotional states to drive action is something to be cultivated and never knowingly abandoned even if it could be. In the executive suite, my observation over some time is that this ability to harness emotion in decision making reveals itself in the passionate narratives that play out in every Board Room. “Doing X is not acceptable. We’ll get burned!” “The safest way to go is Y!” “From my experience, Z is most promising!” Emotional pathways, not cognitive and certainly not behavioral ones, guide an enterprise. Read any popular business book on Leadership and return to reflect on this point.

To drive the point further, how can executives make purely rational choices when consumers who buy their products do not? Brand affinity is at its essence an emotional affinity that causes consumers to buy more, do more or pay more (or all three) to associate themselves with a product or service. How do executives make rational decisions about the emotional decision making of others? New research techniques that tap into the emotional states of consumers are quite revealing here and are proving to be far more predictive than traditional techniques that ask people to remember and reflect (or worse yet, speculate) on their decision-making. 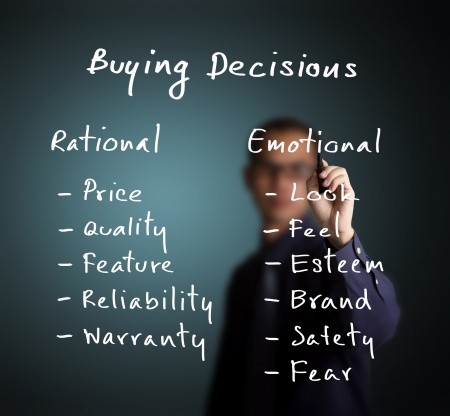 Neuropsychology and Biometrics provide emerging capabilities to monitor consumer sensorimotor reactions while they experience something primarily visual and auditory (e.g., an ad, a political debate, a software in action). The task is to monitor brainwave responses and /or heart rates, skin galvanization, pupil movements, etc. in response to stimuli. Not surprisingly, in doing so we often find more predictive insights than when we rely on self-reported descriptions of thoughts and admissions of feelings. We know right away, without asking, if the marketing image, or the politician in a debate, or the software application in use is registering high attention or low, strong affect or low, and getting encoded (remembered) or not. When the object is persuasion, these base readings can be far more predictive of future actions than what we are told by participants.

While primarily directed at ad testing and product placement, consider the implications for other pressing human enterprises, like elections. While political advisors and pundits do their admirable work focusing wedge issues and sound bites through various communication strategies, there is growing wariness of what the quantitative Polls can provide us as proxies for their success (keeping score on the road to winning). As a former pollster, I am keenly aware of this limitation. Recently, by contrast, our partner technology company had the opportunity to monitor a sensorimotor set of responses to an electoral debate. The results provided clarity to what the pundits and polls were only eluding.

In the debate observed, the challenger to the incumbent did an admirable job by all accounts across the political spectrum in providing a spirited alternative to the political course that was well underway. He appeared engaging and articulate to the well versed insiders who watched and commented. What is of interest is that the neuroscientists knew immediately he was likely to fail. The challenging leader was not registering adequately to sway those undecided and certainly not those who held an opposing party affiliation. His loyal core was pleased but few others changed their views. Quite simply, cognitive attention waned quickly on the ideas he was providing and little of it was getting encoded into memory, irrespective of the policy weight and moral insistence behind his well-articulated views. More telling, on an emotional level this politician’s connection to the audience was broken versus that of his opponent.

At election time, politicians like to stir our emotions as they know intuitively these are the ways to nudge voting behavior in their direction. They look for the emotional knock out moment in a debate, not for an overall score that they provided the most well rounded and well versed views on pressing issues of the day. Negative campaigning is a particular case in point: in the social sphere, negative emotions play an important social connection utility.

If in politics you are going to sell a negative message, what this politician did not realize is that it is best to articulate a simple suspicion or prejudice people already have versus trial a new, complex and negative idea the electorate has not yet adequately considered.

It may be troubling to accede that elections are about stirring up emotions, and that “likeability” and “trustworthiness” are more important than ideas but the election that looms in the US and its outcome will hinge primarily on the emotional state of voters. The emerging leaders of the parties each have at their disposal an army of advisors they can access, well versed in the nuances of public policy making. Nonetheless, they will need to battle out a win based on the emotional territory they overtake among the public between now and October.

If emotion drives some of the most important decisions in our lives, like who will lead our country, it should not be forgotten when selling and appealing to the executive suite. Emotion drives action. While Marketers and Sales Challengers instruct to focus on Benefits, not Features, they often miss adequate consideration of the emotional state of their buyers.

Emote to Connect with the C-Suite

To sell we need to connect. To connect, we need to mimic at some level the emotions our audiences feel on a given topic. From my experience participating in hundreds of executive sales call as a participant, observer and coach you need to consider the possible emotional reasons your prospective client might have for buying your offering and then deliver a message that resonates with this emotional state. Volumes have been written about how sales people need to talk about the prospective client, not themselves, but still we align our emotions around our reasons versus the buyers. Do not confuse your pride and excitement in your product with your buyer’s emotional needs.

Pragmatically, review your sales value proposition one more time. Show and demonstrate the necessity of your solution set by fostering the right emotions. If the articulation of what you have to offer follows a common format of verifiable fact à followed by clear action and à no or muted emotion, it may not be working.

Try a different order and approach: show a powerful emotion with clear actions and then back it up with verifiable facts on your next sales pitch. The shortest possible route to any sale is when an executive feels they really need it, their staff find it easy to implement, their Board of Directors find it reassuring, and their customers love it. Emotionally aligned stakeholders drive successful sales.